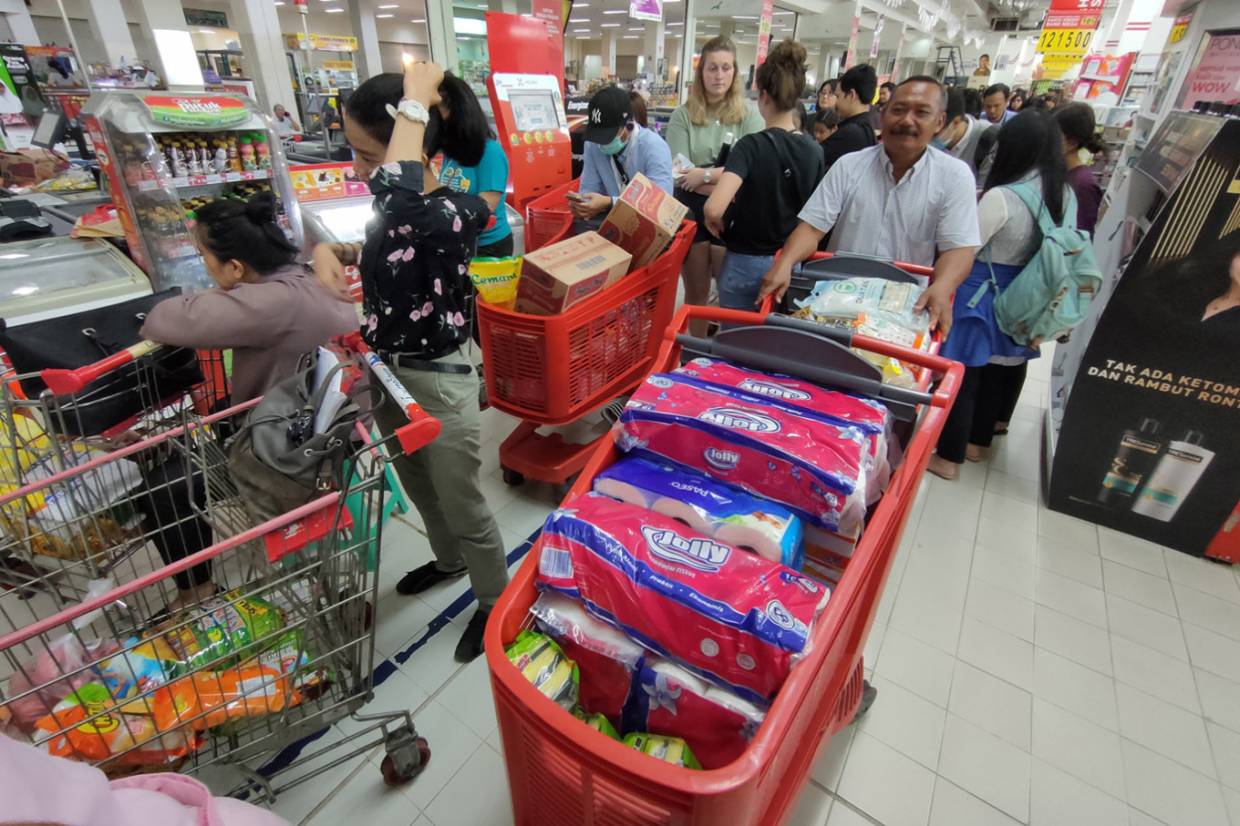 Many Jakartans shared their experience at crowded supermarkets where customers were buying goods and supplies in bulk for stockpiling, amid concerns over the possibility of a coronavirus outbreak in the capital city.

Sandra, a 60-year-old woman from West Jakarta, said she was surprised to find long lines at the local supermarket where she shopped regularly.

"I went there to buy my usual monthly groceries, like rice and other foods. But I was very surprised to find 10 counters at the supermarket with unusually long queues," she told The Jakarta Post on Monday.

Sandra said she saw people emptying the shelves as they bought cartons of instant noodles and bags of frozen foods. The store's stock of items like sugar, hand sanitizers and antiseptic cleaners were depleted immediately, she noted.

"My in-laws also saw a similar scene at a supermarket near their house. Seeing a sight like that made me panicky, too. I ended up buying more than usual," she said.

Sandra added that the customers in the store looked anxious and many in the queues were wearing face masks.

Etty, a 58-year-old woman from South Jakarta, had a similar experience when she visited a nearby supermarket in Radio Dalam on Monday afternoon. She was there to buy disposable diapers for a grandchild, but was unable to find a parking spot.

"The car behind me was not allowed to enter the parking lot because it was full. I saw people coming out of the supermarket pushing three trolleys [each] and long queues at the cash registers. So I just decided to go home," Etty told the Post.

Aside from supermarkets, Jakartans also descended on drugstores to buy hand sanitisers, multivitamins and face masks.

Dea, a 25-year-old office worker, said she discovered that many items had already sold out at a drugstore in a Central Jakarta mall.

"After hearing the President's announcement [on the Covid-19 cases], five of my coworkers and I went to a drugstore near our office after work. However, we could only buy multivitamins and wet wipes. The other items like rubbing alcohol and face masks were sold out," she said on Monday.

Afterwards, Dea went to a mall supermarket to buy groceries, but it was extremely crowded.

"I literally took the last trolley at the supermarket. I could see people buying things in large quantities, like several sacks of rice, several boxes of instant noodles. It surprised me, because the supermarket I went to is a high-end supermarket. Such scenes are uncommon [there]," she said.

Videos and pictures of shoppers emptying supermarket shelves have been making the rounds on social media. - The Jakarta Post/Asia News Network